For those of you who haven’t heard, Frank and I will be trekking down to Austin, Texas tomorrow to represent Where Shadows Slumber in South By Southwest’s Gamer’s Voice Awards! It’s a real honor to have been invited, and we’re super psyched to participate in one of the biggest media conferences in the world.

Of course, attending a show like this isn’t a walk in the park. There’s a lot of stuff we have to do to get ready for it, and that’s not even including the toll the show itself takes on us.

Since we’re going to SXSW tomorrow, last week was prep week. Let’s take a quick look at what that prep involves.

The whole point of these conventions is to show off Where Shadows Slumber, so one of the most important parts of preparing for the show is making sure we have a version of the game ready. One of the biggest surprises I’ve found is how much time and effort this takes. Since we’re actively working on making a game, you would think that we would be able to build and deploy it in a matter of minutes. However, this model of game development isn’t quite correct – having a game that’s 90% complete doesn’t mean we have a complete game with 90% as much content. Rather, it means that we have a game where most of its parts are 100% complete, and some of them haven’t even been started; we might even have a bunch of complete pieces that aren’t hooked up together.

Unfortunately, this means that show prep is quite time-consuming. It mostly comes down to the minutiae – we update the game’s build settings from “easy to develop” mode to “ready for production” mode. We have to change some configuration in order to bring only the levels we want. Small bugs or visual glitches are things we often ignore for the time being and revisit after level design and implementation is complete, but they have to be fixed for a show (even if they’re going to be changed again later). If we weren’t planning on implementing something (like menus), we may have to throw together a crude version just for the current show.

These annoying little time-wasters are one of the reasons we made the demo version of the game – no matter where we are in development, we can always simply bring the demo to a show, and know that it will work. However, as development has stretched out, we find that we don’t reap very much reward from showing the demo; people have already seen it, we’ve already heard all of the same feedback on it, and it doesn’t do a great job of showing how far Where Shadows Slumber has come. Especially for a big show like SXSW, we like to have a build of the game that has some recent work and shows off how awesome it can be, even if it does require jumping through a few more hoops.

After all of that, the only thing left is to actually build the game. This process is pretty easy for Android, and a little more complex for iOS, but it’s not too bad in either case. Then we actually test out the build on our devices, to ensure that users will get the best experience they can out of Where Shadows Slumber. If there are any bugs, then we have to go in, fix them, and build again. This is a much more time-consuming debugging process than usual, but, again, it’s usually worth it to get a chance to show off the most recent developments of the game. 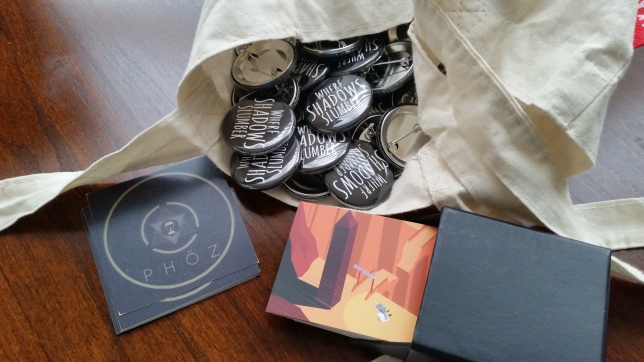 The most important part of showing off the game is the game itself, but that doesn’t mean there aren’t other things that need to be done. First and foremost, we need travel and lodging – a show isn’t much good if we’re not there for it! This is one of the reasons we go to a lot of shows in the northeast, but not too many elsewhere; we can often drive to Boston or Washington D.C., and sometimes we even know someone who lives nearby (and is willing to put up with us).

Another important factor in going to shows is actually being allowed to show Where Shadows Slumber at the show. This involves a lot of emailing back and forth with the convention runners, whether it’s them inviting us and us accepting, or us begging them to let us come.

Once we know where we’re staying and how we’re getting there, we have to figure out what else we’re going to bring. Most of this comes from a pretty stock list – we need devices to showcase on, computers to play videos, our banner, a tablecloth, foam floor padding, etc. On top of that, we like to bring business cards (above), and sometimes Where Shadows Slumber buttons. These can take some time to design, because we like to use very recent content from the game. After that, the only thing left is to coordinate between us when and where we’re going to meet, and it’s off to the show!

I should mention that most of the non-game prep that goes into these shows is done by Frank. He’s the one in charge of Game Revenant’s bankroll, so he ends doing anything that requires actually purchasing something. Which is pretty awesome, because I’m far too scatterbrained to handle organizing any of that stuff.

I know this post is about the show prep, but I would be remiss if I failed to mention the show itself! The preparation is a lot of tedious stuff that makes us feel like we’re wasting time, but actually going to the show is the part that really exhausts us. We’ve spent a lot of time and effort making a great game to show people (both in terms of specific show prep and in general), so we end up spending 2-4 days showing it to literally every person we meet. And at a large convention, that usually ends up being several hundred people. We’re on our feet, talking, conversing, explaining, and schmoozing for pretty much the entire convention – it really takes it out of you!

All in all, show prep is a necessary evil. When you’re already spending most of your free time working on something, it’s really galling to have to spend even more time on more tedious parts of that project. But, once we get to the show, it quickly becomes clear that it’s all worth it. Frank and I are pretty used to Where Shadows Slumber at this point, but seeing the look on someone’s face when they realize what’s going on for the first time is a really great feeling. And knowing that we put in the work to bring the best possible version of the game to a show really helps us understand how people are going to react to the final game itself.

I should probably wrap this post up. Honestly, it’s shorter than most of my other posts, and probably not quite as good, but I don’t really have any time to make it better – I have to fix a bunch of bugs before we leave for South by Southwest tomorrow!

I hope you enjoyed a look at our pre-show process – if you have any questions about our con-going habits or anything else, we would love to hear from you (although we probably won’t get back to you until after SXSW). You can always find out more about our game at WhereShadowsSlumber.com, find us on Twitter (@GameRevenant), Facebook, itch.io, or Twitch, join the Game Revenant Discord, and feel free to email us directly with any questions or feedback at contact@GameRevenant.com. And if you’re in Austin this weekend, make sure you come by our booth!