Jack and I have just returned from our first trip to the South By Southwest Music Festival (SXSW), a week-long party that consumes the city of Austin, Texas every year around this time. Although “South By” lasts a full week, we were only in town for the SXSW Gaming part of the festival, which ran from Thursday, March 15th to Saturday, March 17th.

According to pretty much everyone we met, the gaming portion has really grown over the past five years. SXSW didn’t have a gaming section of the show for a long time, but recently it’s gotten so large that they had to put us in the Austin Convention Center just to hold all the video games!

I’ve been to Austin once before, when I went to Unite 2017. I was happy to return! The food is hearty, the locals are friendly, the weather is summery, and seeing hundreds of thousands of people flood into Austin was truly a marvel to behold. But how did it stack up as a gaming convention?

SXSW might be the best show we’ve been to so far in terms of crowd size and crowd management. Let me explain…

Another way a show can go wrong is if there are too many people! This isn’t really terrible, but it does make things hectic. I remember last year’s PAX East showcase being insane. It becomes a madhouse, trying to hand out iPads to everyone, charge every device, give everyone the pitch in a loud convention hall, and give out business cards. In other words, you want a table full of people playing your game without the excessive crowd traffic.

That’s where SXSW Gaming really excelled. From the time the show opened at noon on a Thursday, there were people in the hall playing our game at the table. Yes, you read that correctly – noon on a Thursday. I’ve never seen a show pull people in right away like that, and I assume it’s because SXSW is such a dominating event that people take off from work and see everything the festival has to offer.

The icing on the cake was that since Jack and I were selected for the Gamer’s Voice portion of SXSW Gaming, they gave us two free 3-day pass wristbands for us to give to our friends. How thoughtful! The staff was wonderful, and the experience of exhibiting at the show was effortless. We thoroughly enjoyed every part of the experience. 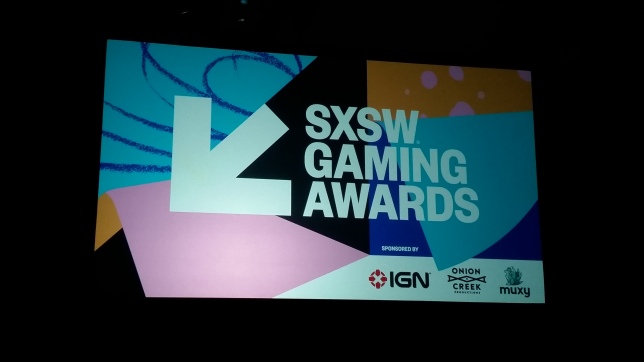 They did something really unique at SXSW that I haven’t seen at too many other conventions. During the three days of gaming, con-goers could vote for their favorite indie video games on iPads strewn about the show floor. Instead of the way these things usually work, where an academy of faceless judges votes on their favorite games, the idea was to create a “Gamer’s Voice” award for the various categories: mobile, tabletop, VR and PC/console. After three days of voting, the winner was announced at a ritzy award show Saturday evening.

These kinds of events are perfect for us since we don’t have a ton of money for booth fees. We applied to this contest back in December of 2017, and I think the entry fee was $50 or something trivial. Then we were selected to attend the show and given a 10 x 10 space on the show floor, as well as two Platinum badges which run $1,650 a pop. So it’s almost like we won $5,000 if you add together the cash value of all of these things [ 0_0]!

I love the idea of Gamer’s Voice, although Jack and I were a bit unprepared for the voting process. The attendees seemed a bit unprepared too, since most of them didn’t realize there was a competition going on. The whole thing seemed like an odd test of our political “get out the vote” skill rather than a focus on the quality of our game. We tried everything we could, including bribing people and busing in voters from out of town, but we didn’t win! You can watch the recorded stream here.

At the award show on Saturday night, our friends at Pine Street Codeworks, Stu and Paulette Denman, took home the grand prize! Congratulations to them and their team for their work on Tiny Bubbles. They deserved the award – Tiny Bubbles is a very pretty game, it’s super polished, and the mechanics are very creative! The game launches on iOS in a little over a month, so go check them out and support our indie brethren! This also marks the second time so far that Where Shadows Slumber has lost to Tiny Bubbles in direct competition, so we have a new rival! The results of the award show can be seen here.

As guests of SXSW, we were always invited to their crazy parties. We had to skip out on the Thursday night party they threw for the gaming exhibitors because we were so exhausted from our travels. But we were happy to go to the SXSW Gaming Awards, as well as the afterparty.

It felt so weird being in the audience of the SXSW Gaming Awards. It finally hit me that I was a part of the same award ceremony where they were handing out awards to games like PlayerUnknown’s Battlegrounds and The Legend of Zelda: Breath of the Wild. I’ve attended these before as an audience member, like when I was at GDC last year and watched the IGF awards. But now Where Shadows Slumber was actually one of the games in the running, so I was a participant rather than a spectator. What a rush!

This isn’t a photo – it’s the book cover from my upcoming cyberpunk RPG system.

After the show, our indie enclave congratulated the Tiny Bubbles team and decided to all go out for dinner together. Then we went to the last SXSW party of the whole festival, which was a gaming rave they threw in this outdoor club called The Belmont. They had this crazy DJ system called WaveVR where someone was on stage mixing the music in virtual reality.

It was fun hanging out with our fellow indies, watching Jack’s sweet dance moves, and chugging refreshing Waterloo™ watermelon sparkling water. 10/10, would go again! We hope to see this crew again sometime soon.

I have no idea how Jack had the strength to actually go to work on Monday. I spent most of the day suffering from a post-Austin hangover, sifting through the pictures that went into our Facebook album. Regrouping after these shows is always the hardest part. I’ve been reflecting on a few reasons why that may be the case…

The worst part is that since PAX East 2018 is right around the corner, I’m going right back into “ramp up for a show!” mode. Hopefully I get some meaningful progress on the art done in the next few weeks! Preparing for shows always makes me anxious.

Feel free to send in your “post-show slump” advice in the comments below or on Twitter! We could use the pick-me-up. Thanks for reading this blog post about our travels to SXSW – if this looks like your idea of a fun time, signups for SXSW 2019 have already opened up to the general public!

Being invited to the show was a great honor, and the traffic at the show was great. This is a show that I hope we can return to one day, once the game is released. If we make enough money from the game to return to Austin for SXSW, I think it would be a good investment. If you are in indie and you can make it to Austin next year, I strongly recommend that you apply for Gamer’s Voice as well.

Thanks for reading our business trip blog! You can find out more about our game at WhereShadowsSlumber.com, ask us on Twitter (@GameRevenant), Facebook, itch.io, or Twitch, and feel free to email us directly at contact@GameRevenant.com.

One thought on “Slumber by Southwest (SXSW)”