I’ve just returned from a whirlwind trip to this year’s Game Developers Conference (GDC), and I have a lot to tell you! Unfortunately, most of what I learned is top secret. You hear a lot at these conventions, so between secret news and talks with undisclosed mobile publishers there isn’t a lot I can disclose. More on that later this year…

But I can certainly reveal my impressions as a first-timer to help you out if you’re planning on going to GDC 2018. Here are three things I learned my first time at GDC!

My number one priority at GDC 2017 was to talk to someone from the App Store about Where Shadows Slumber. My number two priority was to talk to someone from Google Play. Specifically, I’m looking for the people that make promotions and “features” happen. Being featured on an app marketplace can sometimes be the difference between relative obscurity and worldwide fame. It’s that important.

Certainly it can’t be your only strategy, but it’s at the top of my list. Sadly, I failed! Since I was so late to the game (I only found out about GDC when two people mentioned it at MAGFest 2017 earlier this year) I never scheduled times to meet with them. Naively, I assumed there would be some kind of Apple booth and I could meet them there.

No way. Although the major players (PlayStation, Oculus, Facebook, Microsoft, Unity) had large presences at the show, Apple did not have a booth. They probably assume they would just get inundated by indies and it wouldn’t be worth the expense. If you wanted to talk to them, you had to get on their calendar months in advance. They met with business partners in secret rooms during the show, protected under heavy guard. The same is true for Google – they had a booth, but it was specifically to show off Daydream, their mobile VR peripheral. The Google Play team was nowhere to be found.

I learned the hard way – don’t make my mistake! It’s crucial that you do your homework ahead of time and get on the calendar of a major player like Apple, Google, Nintendo, or whoever you want to meet. Don’t leave this stuff to chance! 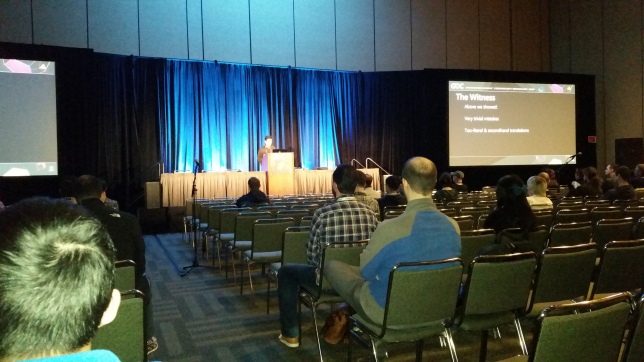 GDC talk about Chinese localization pitfalls, given by Jung-Sheng Lin of Taiwan.

Lesson 2: The Talks Are Great, But You’ll Get Tossed Out

I went to GDC primarily to make connections in the industry. I wasn’t expecting to enjoy the seminars as much as I did. It turns out there are a lot of talks, panels and seminars at GDC and they run the full week. (I arrived on Wednesday, since I was mostly concerned with the Expo – but there are talks and parties beginning on Sunday) The lectures were great! I enjoyed pretty much every one that I went to. The panels weren’t as interesting as the talks because less work went into preparing them. But overall, I was impressed.

One thing bugged me though. I should have seen this coming, but when you buy a pass for GDC you’re effectively selecting what access you’ll have during the show. They have all kinds of “tracks” – Art, Music, VR, All Access, Mega Golden God Status, etc. I got an Expo Pass, which is the cheapest option. This lets you into the Expo and a small smattering of talks.

What this meant was that often I would see a talk advertised (“Nintendo Reveals All About Breath of the Wild!”) and get really excited for it only to be turned away at the door. The paper pocket guide doesn’t warn you about the access required for a talk, it just says where the talk is and who is giving it. To see a filtered view, you need the app. Once I filtered the talks available by the Expo Pass using the GDC app, it become clear that there really wasn’t too much I was interested in. Fortunately I snuck into at least one restricted talk (it was about early access and Ark) and the talks I was able to get into were pretty good. Still, it’s a bad feeling.

So, again, plan ahead! Before you buy a badge, look at the talks available. Filter the list. Ask yourself – are the seminars worth the price jump from $299 to $999? If so, take the plunge. You’ll appreciate getting the access. Otherwise, just deal with the consequences and don’t be surprised when ushers show you the door.

Lesson 3: Don’t Take No For An Answer

The theme of the first two Lessons is quite clear: plan ahead. Having said that, I should also mention that just because you didn’t plan ahead doesn’t mean you shouldn’t muscle your way in anyway.

Rules only matter if they’re enforced, right? Once they stop being enforced they might as well not even apply. Although I don’t believe this is true when it comes to objective morality (don’t go burning down houses because you think you’ll get away with it), it certainly works when it comes to event admissions.

For example, I went to the Big Indie Pitch at GDC 2017 after some urging by Craig Barnes (I owe you one, man!). This is a pitching contest where you show your mobile game to publishers and industry professionals. You get 4 minutes with 5 different groups each, and they judge your game based on its aesthetics, mechanics, marketability, and overall quality. But I never formally applied for the contest because I missed the submission cut-off by one day. Feeling dejected, I almost didn’t even attend! It was 3 pm on a Thursday, I was already exhausted, the event wasn’t close to the convention center, and I very nearly bailed to go to other events instead.

Something told me I’d regret it if I didn’t at least show up, so I took an Uber over. As the event began, I begged the event coordinator Simon Drake of Steel Media to put me on a Waitlist. If people didn’t show up, I could take their slot! There were four others like me so Simon agreed, and to our surprise the Waitlisters were given a chance at the tail end of the contest to make our case to the judges. (OK, this isn’t really “muscling”, more like “pleading”… but you get the point!)

To my utter shock, Where Shadows Slumber received third place at the Big Indie Pitch! Jack and I now have $1,000 in marketing money to use on any of Steel Media’s owned platforms, and we’ll put it to good use. Another awesome thing: the second place winner, Louard of Suzy Cube, was also on the Waitlist! The moral of the story? Plan ahead, and plan for everything.

Then, expect your plans to go wrong, and don’t give up when they do!

I’m going back to GDC next year for sure. We may exhibit at the show, or just walk the show floor. I definitely want Jack to see this, because it’s an awesome experience. Where Shadows Slumber will hopefully be commercially available by GDC 2018 so the timing should be perfect… but you know what they say about plans.

Were you at GDC 2017? Tell us about your experience in the comments below! You can find out more about our game at WhereShadowsSlumber.com, find us on Twitter (@GameRevenant), Facebook, itch.io, or Twitch, and feel free to email us directly with any questions or feedback at contact@GameRevenant.com.