If you are reading this, you are one of the few survivors of the worst winter storm to hit the east coast since the formation of Earth as a planet. Welcome to the Winter Storm Grayson resistance. We were able to get the Internet uplink working, but only for a few minutes. Just enough time to tell you how MAGFest 2018 was!

Setting Up The Bomb

To be honest, I did not encounter anything more than snow flurries and severe cold over the weekend. I drove down on Wednesday afternoon, which was before the storm hit. Also, the beautiful Gaylord Hotel located along the scenic National Harbor was more inland than I realized. We weren’t even close to the the Maryland coastline! Sure, the river froze, but we didn’t get any snow at all.

When I got to the hotel, I was greeted by a bubbly Magfest banner welcoming “Adventurers and Dreamers.” (I’m not sure which one Jack and I count as…) The MIVS banner shown above was proudly displayed in Hall C where all the indies were, and gives you a good idea of what that section is like. I love that they have this. I can’t tell you how much it means to us that we got a free booth at a show like MAGFest! 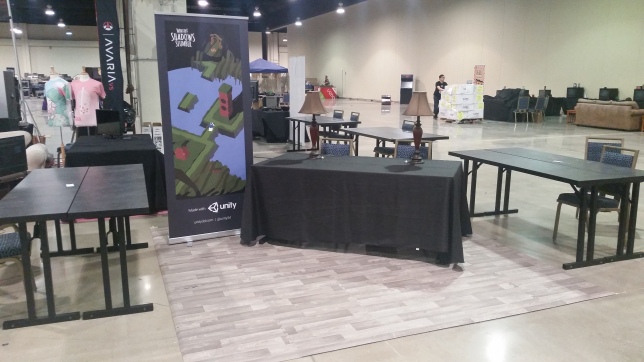 By Wednesday evening, the Where Shadows Slumber booth was set up and ready to go. It was pretty painless, and everyone loved the sweet GreatMats foam flooring we had from last year. This post is sponsored by GreatMats. Have you gotten your GreatMats GreatMat today? I stole the idea to include table lamps from the Mushroom 11 team, who used it to great effect a few years back at a Sheep’s Meow event at the NYU Game Center. It wasn’t anything special, but the booth got the job done. Other people had crazy stuff like tents and massive posters. Maybe next year, when the game is for sale, we’ll go to town on the booth. I never really plan this out, I always wing it. But I bet if Jack and I sat down and asked ourselves “what experience do we want people to have with our game at our booth?” we could come up with something really cool.

Wednesday was the calm before the storm. Not Winter Storm Grayson – Winter Storm “Tons of People Dancing In The Gaylord.” By Thursday, the party had officially begun. They put us in the official hotel this year, which meant I had plenty of time to capture the insanity. If there were any normal, well-adjusted people staying in the hotel these past four days, they must have been terribly confused.

The show ran from Thursday to Sunday, with a pretty stable crowd of people all four days. Sunday surprised me actually – I don’t remember the short time-frame of Sunday being quite so busy last year. I had people at the table until after 2 pm on Sunday, which is when everything shuts down.

The build Jack prepared included the game’s first World (The Forest), then World 3 (The Aqueduct) and finally World 5 (The Hills). We wanted to jump around to get some feedback on parts of the game we haven’t shown off as much. I’ve seen tons of people play World 1 (The Jail) and World 2 (The River) at this point. And since I haven’t gone back to polish those yet, it would have been more of the same feedback.

The response to this build was overwhelmingly positive. People loved the new audio, although it was hard to hear in the crowded MAGFest hall. They commented on how beautiful the art style was, and how the game was more challenging than last year’s Demo. The critiques they had were generally about the game chugging along on the Amazon HD 8 devices (one Level has a ton of lights) and other things that were hard to quantify, like the way that draggable objects “feel.” It’s hard to know exactly what players want when they say stuff like that, but that’s what the final months of a project are all about – tweaking the small stuff.

There Was Plenty of Indie Time

I’ve made a conscious effort during these shows to try to spend as much time with other developers as I do with customers. After seeing the same faces show after show, it’s a little embarrassing to not get to know them. I’m pretty shy… and there’s always a ton of stuff to do at these shows. But it’s important to make an effort to join the game industry and treat it like a community. 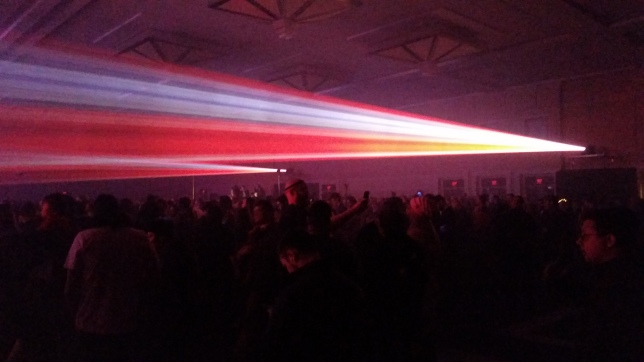 The MIVS crew threw a party for all of the game developers and staff on Friday night. We got to see the crazy penthouse nightclub that the Gaylord Hotel has up on the 18th floor. I don’t go to a lot of nightclubs, so I was easily amused at the pretty rainbow lights and stellar view of National Harbor. It was coooool, man!

After meeting up with some NYC-based indie devs, we went to a crazy Power Glove concert. Note to self: keep earplugs on hand for this sort of thing. Power Glove plays heavy death metal renditions of classic video game themes. It was the most MAGFest thing I’ve seen at MAGFest.

Swing and a Miss!

Sadly, although they handed out MIVSy awards to the developers on Saturday evening, Where Shadows Slumber did not receive any accolades. In our defense, we only brought a few in-development Levels from the final game. Other teams brought their final “ready-to-purchase” games and put their best foot forward. Just like last year when we brought our Demo, you can’t expect to win an award for something you haven’t finished yet. It wouldn’t be fair!

But it still stings a little bit – that’s the downside of the development route I took us on. There’s a ton of time we spend at festivals showing off our flaws and weaknesses, because we want feedback. It’s going to make the final game better, but it can be exhausting listening to the same comments for four days straight. I just hope that once the game “goes gold,” it will receive the recognition it deserves. Do I hear #2018GameOfTheYear?

I’m home now. Sadly, I had to run the table alone this past weekend – Jack was planning on coming, but had to stay home unexpectedly for personal reasons. He’ll explain everything next week in a really important blog post. Sorry to be a tease, but this is something we’ve known about for a while but have not made public. It’s his story to tell, so I won’t go into it. Please stay tuned for next week’s blog for more details.

Thanks again to the wonderful MIVS staff for inviting us to return and providing such a great opportunity! We hope to return for many more years to come, whether it’s to sell Where Shadows Slumber or get some feedback on a future project. Rock on, everybody!

That’s all for MAGFest! Please leave a comment to let us know you’re not a Russian Twitter bot scanning this page for mercenary purposes. You can find out more about our game at WhereShadowsSlumber.com, ask us on Twitter @GameRevenant or Facebook, and feel free to email us directly at contact@GameRevenant.com.