After missing this show multiple years running due to totally forgetting about it, I finally got a chance to see Boston FIG through the eyes of an exhibitor! This past weekend, on Saturday, September 14th, two gyms in the Harvard Athletic Complex were filled with games by independent creators. Where Shadows Slumber was one of them! Read on to hear my first impressions of being an exhibitor at this show.

The schedule for this short show was pretty straightforward – setup on the Friday night beforehand, with a show from 9 am to 6 pm on Saturday followed by an award show. It’s worth mentioning the Friday setup was mandatory, and no setup was allowed the day of the event. (If you have a long drive to get to the show next year like I did, keep that in mind! Friday night traffic in Boston is brtual.)

I was next to the very chic and awesome looking Sole by Gossamer Games, and I definitely took notes on booth aesthetics. Look at those lamps! Tom always goes to shows in full white attire too, it’s very striking. I might have to come up with a Game Revenant uniform…

The Figgies took place in the other gym (where tabletop games were) at the end of the day. During the show, people could vote for your game by slipping a raffle ticket into your little box. At the end of the day they awarded the Audience Choice award to 1 tabletop and 1 digital game. They also awarded games based on juried categories like Compelling Game Mechanics and Best Visuals. (More on that below)

My legs were killing me at the end of the day, but I had a great time!

As always, everyone who came to the booth absolutely loved the game! It was a busy day, too – I counted 135 demos (that is, people who stayed and played on a device for at least a few levels). Journalists from Hardcore Gamer and the Nerd Entertainment Hub approached the table, and the Hardcore Gamer coverage is already online! (Scroll down to read James Cunningham’s thoughts on Where Shadows Slumber)

The show is very affordable, too. You’re not guaranteed to make it into the show, but an application only cost me $63.69. If you don’t live near Boston you’ll have to drive, but parking was only $10 so travel wasn’t an issue. As far as lodging is concerned, that could make the show more expensive for you. (I lucked out because I have family that lives in the suburbs outside the city.)

Since it’s a curated show, you’ll receive detailed feedback from judges about what they thought about your game. This actually benefits work-in-progress titles a lot more, so consider going to Boston FIG pre-launch. Since Where Shadows Slumber has been out and finished for a year, it’s less helpful for us. Speaking of judges and feedback…

The only negative thing I can say about the event was that I never knew for sure if Where Shadows Slumber was eligible for an award or not. For Boston FIG, you need to apply for a specific award in order to be at the show. My understanding was that being accepted into the showcase meant you were also eligible for the award. (For example, we submitted under Compelling Gameplay Mechanics, but Best Visuals was another option)

So… was our game nominated or not? When they read the nominees for Compelling Gameplay Mechanics at the award show, there were only 3 games listed. I would have appreciated an email saying something like “hey so you’re not nominated for the award but you’re still accepted to the show!” Maybe they’re worried that if they do that, people will bail?

In any event, there’s always next year! (Or next game, I guess) If you’re in the greater Boston area and have a work-in-progress indie game, I highly encourage you to submit your work next year. Don’t forget, you can also go to the show as a customer and enjoy a fun filled day of gaming!

I’m happy to announce that Where Shadows Slumber has been accepted into the Boston Festival of Indie Games, or Boston FIG! (We’re having a lot of success with figs these days, I suppose) Here’s their description:

“BostonFIG Fest returns for our 8th annual celebration of independent games! Join us at our flagship September event and play hundreds of games designed by talented people that may even be your neighbors!

Get inspired by the incredible game creator community that we have both regionally and beyond.”

Fest attendees have the chance to play digital games, tabletop games, and immersive experience games in a casual environment, for a very affordable ticket price. The games at BostonFIG Fest are as follows: Tabletop games in the Competitive Showcase, Digital games in the Competitive Showcase, Tabletop Exhibitor Games, Digital Exhibitor Games, and even Sponsor Games in both Tabletop and Digital. Other Fest features include the Artist’s Alley, Tabletop Freeplay Area, Boffer Arena, the Figgies (Awards Show) Ceremony, and more!”

We submitted Where Shadows Slumber to this show at the end of April, on the 22nd. After a lengthy process laden with judges and juries, we got the acceptance letter just this week. They also gave us some feedback from the judges about our game. We’ll be in the Digital Competitive Showcase, mentioned above.

I’ve never been to Boston FIG before, but I’ve only heard good things about it. (It also comes during a time in the Calendar where there aren’t a million other game events going on and you can actually focus on this one.)

If you’ll be in Boston on September 14th, come to the Harvard Athletic Complex and check out all of the awesome games on display, including Where Shadows Slumber. Children under 12 attend Boston FIG for free, and there’s a scavenger hunt going on all day around the festival. Don’t miss it! 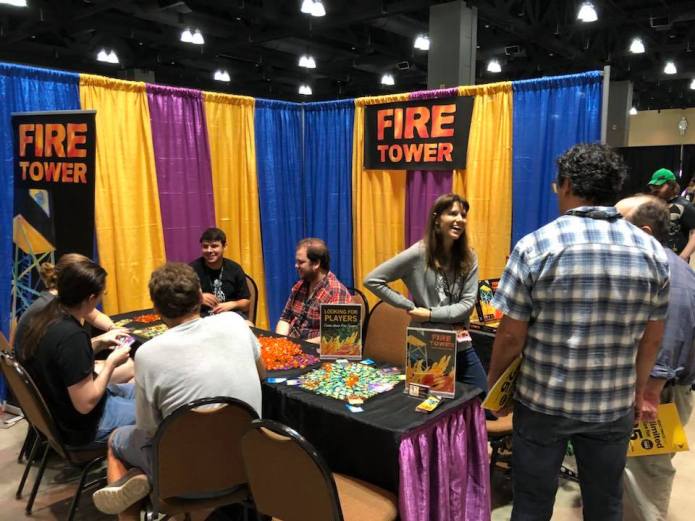 I am happy to announce that Where Shadows Slumber has been accepted into the 5th annual Connecticut Festival of Indie Games (CT FIG), which is taking place within ConnectiCon XVII this July! They have an indie showcase of board games and video games that were offered at a discount to those who applied early and submitted the game to their judges. The show is in Hartford, CT next month (July 12th – 14th) at the Connecticut Convention Center.

I’ve never been to ConnectiCon before, but I went to a CT FIG event back in 2016 during the Mr. Game! years and met Jason Miceli of Geek Fever Games. The event was quite small, and very board game focused, but apparently their offerings have expanded to digital games as well! (There’s not many of us, but we’re growing…) I’m glad to hear they have connected with ConnectiCon to reach even more people! I wish Jason the best as they expand the CT FIG brand.

That’s Jason in the middle, next to his game Dead Man’s Doubloons,
which I playtested years ago!

If you live in the area and want to purchase tickets, go here!

That’s all for now – but stay tuned to this blog for upcoming posts about a design patch for Where Shadows Slumber, news about our PC port, and a look inside our insane new digital ad strategy.