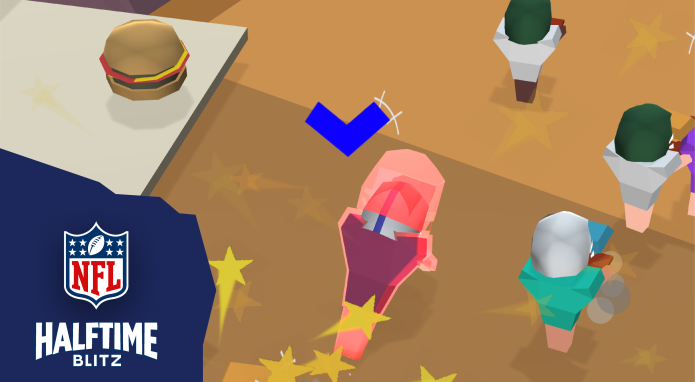 As I promised in a recent blog post, I’m making the build of NFL Halftime Blitz available to the public to download and play. We’re well past the NDA period, so I’m confident we can release this to the world without any repercussions!

What you will be downloading is a prototype created over the weekend of August 23rd, with some light modifications made in the two days afterward. The whole team is extremely proud of the game!

You can find it right here!

Let me know what you think of the game, either in the comments here or on itch.io. Thanks for playing!

Sidenote: The Where Shadows Slumber itch.io page still looks like it did during the Demo years! Man, I need to update that one… totally forgot about it.

Back in August, Playcrafting gave us an incredible opportunity to take part in a game jam challenge for the NFL and Verizon. Now that we’re allowed to share details about the contest, here’s my full recap of the challenge weekend and the aftermath! Read on for a recap of the Verizon 5G NFL Mobile Gaming Challenge.

The Game Is Afoot!

Eagle-eyed blog post readers will remember seeing this blog post where I described applying for this challenge. I never posted to say we were admitted into the final five, because we weren’t allowed to disclose any of the details of the competition during the past month. Before the jam weekend in August, I got a call from Dan Butchko to tell me that Game Revenant was admitted into the challenge and that I had to put a team of four together.

I honestly hadn’t expected to make it in, so things happened a little last minute. I have to thank Noah Kellman, Brian Intile, and Nicolas Morales not only for their hard work over the jam weekend, but also their ability to drop everything at a moment’s notice and code a game for 48 hours straight.

The stakes of the contest were high. First of all, each team member received $1,000 for their work over the weekend (along with up to $500 in travel expenses to get to Verizon’s Alley on 24th St in Manhattan). More importantly, Verizon and the NFL were committed to picking two teams from the final five – these teams would receive $400,000 to take their prototypes and turn them into game-day ready mobile experiences that will launch at Super Bowl 2020 in February!

There was no time to lose! I put out a call for developers online and reached out to a few people I knew would be perfect. I actually had never met Nicolas before, but he’s an indie game dev from New Jersey who makes a lot of games in short time spans who came highly recommended by Brian. (They’re both veterans of the game jam wars of ’96) Noah is of course one half of PHÖZ, the talented team that composed the audio for Where Shadows Slumber.

The challenge began in earnest on Friday, August 23rd at Alley around six o’clock. Alley was our office for the entire weekend. Each team got a chance to claim some space (we picked the NY Giants Room) and grab dinner before the kickoff ceremony that detailed everything we would do for the weekend.

Our charge was to prototype the idea from my original pitch document, NFL Halftime Blitz, with an emphasis on the gameplay. We were allowed to postpone 5G specific features, which was a sigh of relief. (Getting networking up and running would have been a tall order for a 48 hour game jam.) We would need to still produce a concept for how the networking could work, as well as meet with a 5G expert at Verizon to talk through potential problems with the project.

In retrospect, picking the NY Giants room may have been our downfall.

From there, they cut us loose! We spent the next few days shuttling between my apartment and the Alley, cramming to get something playable up and running from scratch. With a clear idea of what to accomplish, and lots of stretch goals, the team just tackled every objective as soon as possible in order of importance. There was a ton of artwork to do, too – every asset in NFL Halftime Blitz, from the music to the art, was creating during the jam weekend by our team. Of course, the Unity engine made our lives a lot easier too.

The Alley team kept us fed. Well fed! There were three catered meals every day, huge tins of food with plenty of drinks and way too much candy. We were, of course, allowed to leave the building, but we never needed to! I have no regrets. Time is of the essence during competitions like this. I really appreciate that they made it easy for us to keep our heads down and work.

The weekend ended Sunday evening, when it was time to present our work to the judges and our competitors. (The other teams didn’t really show each other their progress during the contest… it had a different vibe than your average game jam) Finally, we got to see what our rivals had been creating all this time. I’m incredibly proud of the work we did on NFL Halftime Blitz, and I know the audience was impressed with our results.

After the presentations, everyone got a final sit-down with the judges to receive feedback on our games. This was pretty tense. We had to get as much information out of them as possible. They also asked us some good questions, like “What about the off-season?” and “What makes this uniquely an NFL title?” We took as many notes as possible during the short meeting and left Alley together. At the end of the day, it’s their money – no matter how much we love our game, if they don’t want it at the Super Bowl, it’s not getting selected.

Technically, our submissions were due the following Tuesday. This gave us another 48 hours to refine the submission pitch PDF and bug test our game. Other than polish, the game didn’t change too much. (It’s hard to work on something remotely once you’ve been in such proximity for so long) We really overhauled the pitch though, converting it into more of a team-based street-football-in-the-concession-area mobile game. Brian even got his father’s friends together for a virtual focus group session all about what they loved about football, and the NFL in particular. Nervously, I submitted the final pitch & build to Playcrafting at 9:15 pm on Tuesday night…

The winners were announced just recently, and as you can see we were not selected. Qué lástima, indeed. We would have loved the opportunity to work on this game more, and I really believed in the business plan we set forward for the future of the game – not just during the main NFL season, but the post-season and draft periods as well. NFL Halftime Blitz will always be here if they change their mind, though! I’d love to work with the NFL and Verizon again someday.

Want to see more? This images in this blog post aren’t the only ones I shot! I tried to take a bunch throughout the weekend because I knew I’d write an embarrassing tell-all eventually. I put up more photos on the Game Revenant Facebook Page right here.

“It’s an amazing feeling when you can successfully coordinate an idea amongst multiple people and make it come to life in a short time span.“

We all really enjoyed the experience. Regarding the challenge, Nicolas said “It’s an amazing feeling when you can successfully coordinate an idea amongst multiple people and make it come to life in a short time span.” I’m just glad to be a part of it, honestly! Being left out of the competition would have felt really bad, and I’m going to make a point of signing up for more of Playcrafting’s challenges.

The contest rules state clearly that those who were not selected retain ownership of the game’s IP. I probably shouldn’t have slapped the NFL logo on there, but I don’t think their lawyers are going to come tracking me down anytime soon. So keep an eye on this space – now that the non-disclosure period is over, I’ll add the game to the Game Revenant itch.io page later this week so everyone can try it for free!

I hope this shed some light on the process. I wish I could have shared more during the contest, but rules are rules. Have any questions? Leave a comment and I’ll get back to you as soon as I can!

I wanted to take a break from the usual Where Shadows Slumber news to talk about an exciting opportunity I discovered through Playcrafting. Verizon and the NFL have teamed up to challenge game developers across the country to create an awesome mobile experience that uses the new 5G Network. I’ll let them do the talking here:

Verizon has partnered with the NFL to re-think mobile gaming in a 5G world. That’s why we’re searching for the next big idea for a football-themed mobile game that leverages the power of Verizon 5G Ultra Wideband.

The Winning teams will be awarded $400,000 to develop a game that will debut at Super Bowl LIV events.

On Sunday I submitted on behalf of Game Revenant to create a game called NFL Halftime Blitz. In this proposed game, you are a football fan who is trying to push through the Super Bowl crowds in order to get your favorite snacks before halftime ends. Dan Butchko of Playcrafting was kind enough to help me with the submission even though he was also dealing with his massive game convention in New York City this weekend, PLAY NYC. Thanks, Dan!

Sometime by next week, I think I’ll know whether or not this proposal was accepted into the next round. If it’s accepted, Verizon will host Game Revenant (as well as the other finalists) at a paid game jam in the Verizon 5G Lab. From there, I’ll have to prototype the game over the weekend in order to impress the judges. Only the best game prototype can win, receiving $400,000 to develop the game in advance of its launch at the Super Bowl.

Whether or not I make it past the pitching round, I had fun designing something so zany, i with a bunch of really specific constraints. That’s the best way come up with truly awesome ideas, whether you’re talking about games or some other form of art. Good luck to all of my competitors, especially those that make it to the next round!

I hope to see you there…