Welcome to State Of The Art, September 2017 edition! This monthly progress report is written by Frank DiCola and is focused entirely on how the game’s visuals have improved in the past month. Without further ado, let’s explore the major leaps forward we took in September!

This World has been started and is looking promising so far. It’s one of the easier ones on the list, since this World is mostly deep water and narrow pathways. Compared to some of the other ones I did this month, that’s a cakewalk.

The Aqueduct is a cavernous waterway built by humans that Obe explores midway through his journey. The Levels here often make use of light sources that don’t come from Obe’s lantern.

This World is not 100% finished – but nothing ever is, at this stage of the process. Jack is currently modifying a water plugin I downloaded from the Asset Store to work with our strange lighting system. There are also highly specific items I still need to model. That always gets left as the last thing…

I’ve been looking forward to working on this World for a long time. I loved the cool mountain desert aesthetic we had in the Demo, and it’s a shame that didn’t make it into the final game. This is even cooler though – a pueblo style city in the middle of a sandstorm! What’s not to like? (Sandstorm sold separately) 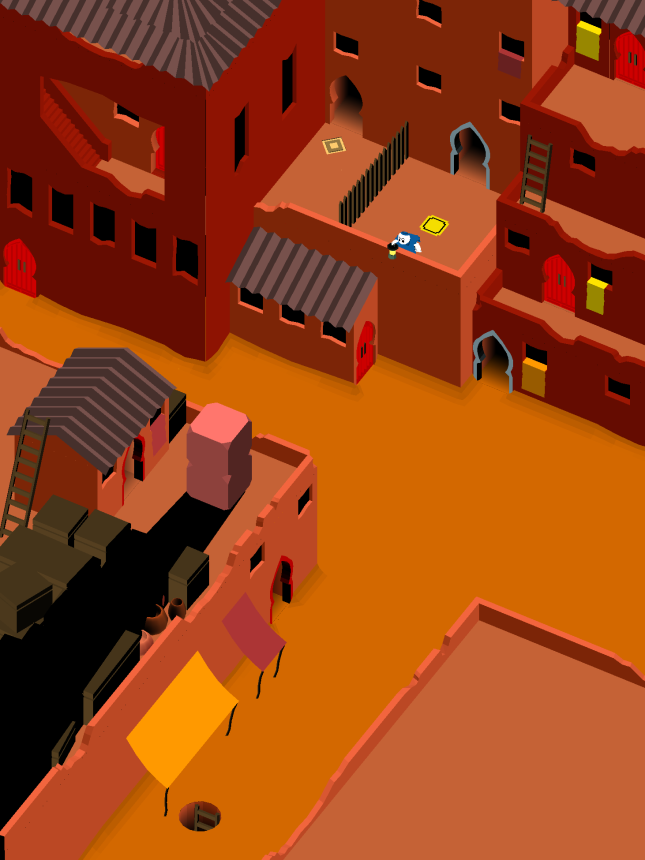 Creating these detailed environments takes time. As I sat down to write this, I realized that 3 of the 5 Levels in the City aren’t even in good condition to show the public! While every Level in this World is functional and the art has been started, very few of them are complete.

Get out of there, Obe! Nothing good ever happens in alleyways…

This World tells a complex story in a short amount of time, and a lot of highly specific artwork is still in the works. Look out for those missing Levels in a future update, and accept my apologies. I spread myself quite thin this month in order to cover a lot of ground quickly.

I really stretched myself this month by going even further and starting World 5, the Hills. I hadn’t originally planned on doing this, but I got artist’s block on the City and decided to move on. This is usually a good idea – by the time I return to my previous work, I’ve had some kind of epiphany for what to do. 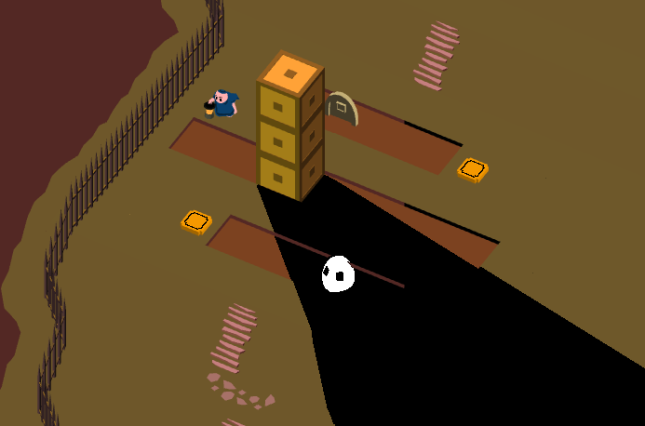 The Hills are modeled after the dreary cliffs of Ireland. We’ve decided to make this like one long graveyard, with mechanics to match: little tombstones that turn into ghosts when they’re covered in shadow. By the time you shine a light on them again, they turn back into tombstones… but they’ve moved. I think you can get an idea of how puzzles might work here. This is our own twist on the Boos from Super Mario, which behaved differently depending on whether Mario was looking at them. 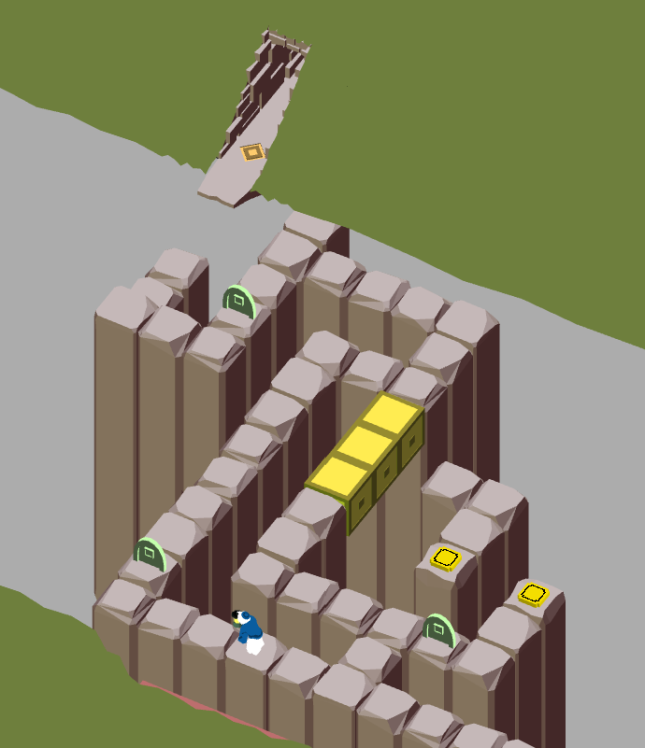 The Hills require a ton of very specific modeling to complete, and have proven really challenging so far. I prefer to use modular tool kits because you get more mileage out of them. Even so, you can’t argue with the results! I threw out the aesthetic seen in the Level above because it was too formulaic. It obviously made use of one piece over and over again and I got sick of looking at it. Now the Levels in this World will all look more like the image below.

This is now my favorite Level in the game. I hope you can see why! (And it’s not even done, I still need to add little grass bunches) 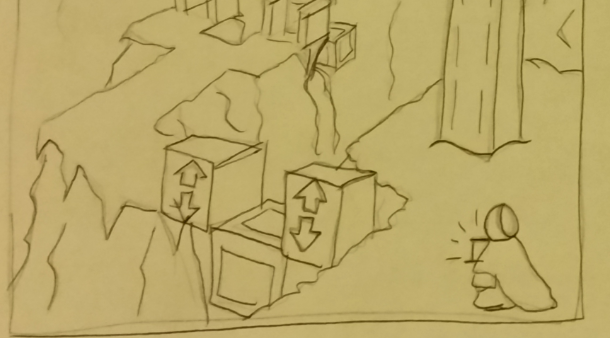 Since I was feeling insane this month, I actually got started on World 6, Summit. This is basically the top of a snowy mountain. It’s really not done yet – you could hardly call it “started”. I don’t even have any screenshots to show you! But maybe you can get a sense of what they’ll look like based on my Concept Art drawings of Jack’s finished prototype Levels. 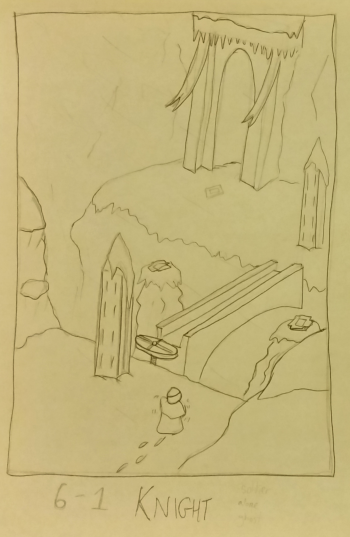 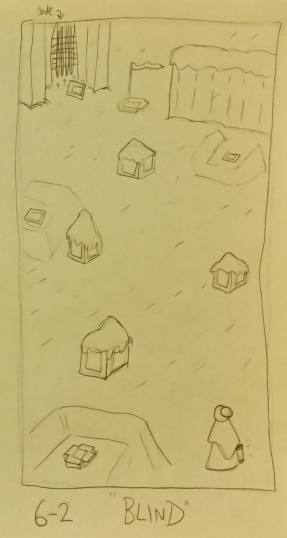 Obe ventures out into the freezing cold. He’s completely alone… except for the ghosts of the damned! (Ghosts of the Damned sold separately)

Don’t Expect Much From October

I apologize for the lack of video this time around. I usually like to keep myself to the high standard of showing footage of the game instead of screenshots. (Video is harder to fake, which means I have to own up to failures in the game’s visuals.) This time around I took the easy way out, since I’m leaving today to go on a crazy week-long business trip. Speaking of that…

September marks one of the greatest leaps forward the game has taken aesthetically so far. To be honest, I was overcompensating for the fact that October is going to be a slow month. Because of this trip (and another during the middle of this month), I won’t have as much time as I normally do to make artwork.

In a perfect world, I would finish World 6 and 7 before we get to November, but I doubt it. Between Unite 2017, IndieCade 2017, and the Mobile Games Forum, I’m missing an entire 2 weeks of work this month. That’s insane! At least you get to hear my thoughts on the shows in next week’s blog post… [ ^_^]!

Just warning you not to get too excited. See you at the start of November for another recap!