Welcome to the State Of The Art, July 2018 edition! This monthly progress report is written by Frank DiCola and is focused entirely on how the game’s visuals have improved in the past month.

Before we reach the spoiler part of the article, I’ll give you a brief update about the state of the art, and how much work is remaining on the aesthetic side of things. There will be no pictures, GIFs, videos, or bulleted lists, so don’t worry about seeing spoilers! (Just don’t scroll down too fast. You’ve been warned!)

Missed last month’s State of the Art? The June edition is right here.

When June began, 5 out of 10 cutscenes were animated and World 7 was less than half complete.

As of July 3rd, 7 out of the game’s 10 cutscenes have been fully animated and World 7 is finished! (There’s a tiny amount of work remaining for these two cutscenes, but cut me some slack here) I also did something I don’t normally do and programmed the cutscenes to have a pause menu where you can skip the cutscenes. Does that count as “art?”

What’s next: Later today, I’ll finish the two cutscenes that are nearly complete. This month will then be dedicated to finishing the final 3 cutscenes and putting the finishing touches on the game’s artwork.

You’re all caught up. Now, if you want a sneak peek at some of the artwork I did this month, read on… but beware of game spoilers!

SPOILER WARNING: The rest of this article contains screenshots, GIFs and videos of later sections of the game. If you want to experience them in all their majesty for the first time on your mobile device when the game launches, don’t read on!

My work on World 7 is officially done! It took longer than I would have liked, but the Levels came out great and it will serve as a proper final sendoff for those who complete the game. Here are the full screenshots from the three Levels I had to finish:

There will still be GitHub Issues to address in these Levels, so I’m not completely done. However, the same is true of every Level in the game at this point, so it doesn’t matter! I hope you like the look of these Levels. Since you’ve journeyed into spoiler-land, you may as well tell me what you think in the comments below!

Once I finished World 7 about halfway through June, I moved on to two more cutscenes. I do these chronologically, so check out last month’s blog if you’re trying to piece the story together through short GIFs. Here are some teasers from these cutscenes:

“Can I interest you in a golden circle, by any chance?”

At the beginning of this month, I had a long sound recording session with Alba and Noah. You can read all about it here. The short version of the story is that we recorded voices for all of the characters that “speak” in cutscenes. (By speak, I mean “loud unintelligible grunting”) For the past month, they’ve been working on implementing those into the game, so the cutscenes I completed in May are going to have finished audio soon. 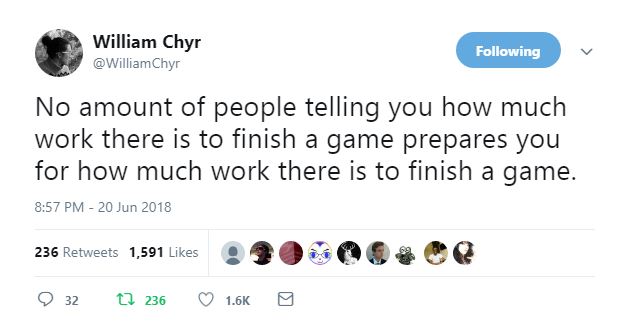 Sadly, this blog post reveals that I didn’t get as much done in June as I’d hoped. Because World 7 took a long time to finish, that delayed my progress on the cutscenes. Being behind schedule is a slippery slope!

As soon as I finish this post, it’s back to work finishing those two cutscenes I mentioned. I’ll record them and send them off to our audio team for scoring. Then, there are three more cutscenes that need my love – and one includes a full credits sequence that may just be too ambitious to put into the game. I’ll also need to take some time just to address the mountain of GitHub Issues that Jack logged as he played through the entire game. Some Levels require artistic changes to make the shadows look better. I can save those for later, but we’re running low on “later” – and I don’t want his progress to be stopped because I couldn’t take a break from cutscenes for an hour to read all these emails. Finally, there is a Level Select screen for World 7 with my name on it. Those tableaus are beautiful but each one takes a few hours to complete.

The tweet above, from William Chyr of Manifold Garden fame, is appropriate. I always expected the end of development to feel like less and less work as we neared our goal, but it’s the opposite! There is so much to do, and so little time.