Everyone has an opinion on everything. If that’s true, then why is it so hard to get people to talk to us about Where Shadows Slumber?

My name is Frank DiCola, and along with my friend Jack Kelly we’ve been maintaining this blog and developing our game Where Shadows Slumber together for a while now. The game is launching soon, but we’re not announcing a specific release date to the public yet. Regardless, now is the perfect time to get feedback on our game. We’re “landing the plane,” so to speak.

It’s too late for broad sweeping changes, but now is the perfect time for you to nitpick all of the tiny details in our game. If you tell us to fix it, we’ll fix it before we launch the game on the App Store – and that might save us from getting a negative review from someone else who notices the same problem!

If you tested the game at any point during the last year, you probably heard us wave away from criticism because we’d “handle it later.” Well, now is later! We appreciate your broad feedback then, and we could really use your specific feedback now.

OK, now that I convinced you to join our fan club, let’s talk about how you can join the conversation! This blog post is dedicated to discussing the various channels we’ve setup for feedback. No matter where you make your home on social media, there’s an avenue for you to use to contact us!

This one is pretty recent. If you have the app Discord on your computer or phone you can join our public channel. We’re still getting in the habit of posting screenshots, videos, and blog posts in the chat. But we’ll use it more if more people join! 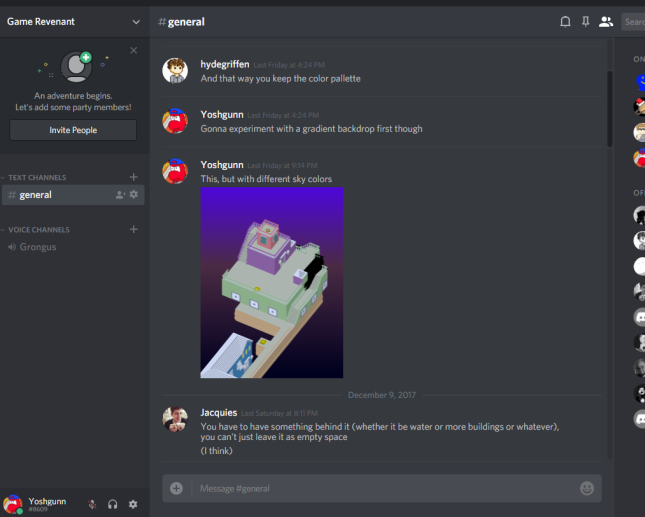 Discord’s chat system, as we discuss how best to decorate one of the game’s Levels.

I plan to use this Discord for future projects even after Where Shadows Slumber launches, but it’s safe to say that this will be dedicated to this game for at least the next two years or so. Feel free to join or leave anytime, just be sure to introduce yourself when you jump in the chat! Obviously, I retain the right to kick you out if you’re being rude to the other people in the chat. But I promise not to remove anyone for criticizing our game – that’s the whole point! It’s hard to offend me and Jack, so don’t worry about that.

Although Discord supports voice chat, we usually just use the text chat. A voice consultation in a private channel with Frank is available upon request.

We’ve had this private Facebook group up and running for a while, but it’s difficult to get in the habit of posting to it. We haven’t quite hit the critical mass of people yet needed for this to work. So, join the conversation!

Link to the Chamber of Judgment Facebook Group: (link)

Similar to Discord, this is a space dedicated purely to discussing the game and giving feedback to developers. Anyone with Facebook can join for free! If you live on Facebook, this is the best way to give us feedback.

Our Cartrdge page is one of the online communities where we have the least control over the conversation, but we’d still appreciate it if you check it out! Yes, I spelled that right. Cartrdge is a super cool website for game artists to post their work. You’ll find everything there from super awesome shaders to physics demos to entire voxel cities.

Link to the Where Shadows Slumber Cartrdge Project Page: (link)

I love scrolling through the home page there just to see what everyone’s working on. It’s one of the best designed portfolio websites I’ve seen, and we’ve been selected by their Editors once or twice so far. You can also leave comments on posts, so make an account with them and be on the lookout for our stuff. Give each one a Like and then share your opinion with us!

This poor website seems to be on its last legs. But the concept is so genius, I wish it would stick around. It’s a website for indie developers to post their projects, get feedback, and climb the Leaderboard to the top! You should sign up there and give them a morale boost. They explain the concept better than I could:

“One of the biggest problems that a game dev faces as they create a game is gaining a sort of “mothers love” for their game. This prevents them from being able to properly determine its flaws. Friends and family members tend to sugarcoat their feedback to avoid from being discouraging but this actually harms more than it helps. Roast My Game is a site created to help game developers gather ‘sugarfree’ feedback on games they are working on and to inspire other game developers by sharing development progress.“ [emphasis theirs]

Link to our Roast My Game page: (link)

A typical comment in response to our Demo, and a reasonable reply in progress.

We posted our Demo to that site last year and got some good feedback. Tragically, there just aren’t enough people using Roast My Game. My suspicion is that everyone on there is like me – they want feedback, but they don’t want to play other people’s indie games. Too bad!

“Ceiling… what are YOU doing here?”

What Did We Miss?

This is super important so I’ll close with this – what have we missed so far? Are you angry that there is no Where Shadows Slumber Subreddit? Perhaps you feel like we’re neglecting TouchArcade, Instagram, Pinterest, or some other online community you love?

I’ll be pretty frank here (ayyy) and just let you know that if there’s a guaranteed community out there, we’ll come to you. I know nothing about Pinterest. But if you know of 1,000 people out there who love indie games and would boost us on Pinterest, I will learn and become the Pinterest master. We don’t care, we just want to promote the game and get honest feedback from you before our game hits the cruel, unforgiving free market.

Leave a Reply under this post with a community you’d like to see us join. We hope to see you on the interwebs!

Hey! Join the conversation using the links above this. What are you doing reading this blurb? You can find out more about our game at WhereShadowsSlumber.com, ask us on Twitter (@GameRevenant), Facebook, itch.io, or Twitch, and feel free to email us directly at contact@GameRevenant.com.