Welcome to State Of The Art, June 2018 edition! This monthly progress report is written by Frank DiCola and is focused entirely on how the game’s visuals have improved in the past month.

I’m going to try something new this month. Before we hit the spoiler part of the article, I’ll give you a brief update about the state of the art, and how much work is remaining on the aesthetic side of things. There will be no pictures, GIFs, videos, or bulleted lists, so don’t worry about seeing spoilers! (Just don’t scroll down too fast. You’ve been warned!)

Missed last month’s State of the Art? The May edition is right here.

When May began, I had just polished Worlds 5 and 6. However, all of the Levels in the game were in a “toss-up” state. There was no indication as to whether Jack could begin optimizing them. That’s a slow process that he doesn’t want to do twice, so we needed some way of determining which ones I was finished working on. (Optimized Levels are difficult to edit, sacrificing changeability for faster runtimes) As I turned my attention to animation, I realized only 2 of the game’s 10 cutscenes were animated, and none of them had any audio. I tried a weird system of putting audio cues in manually through Unity Events, but that failed miserably. World 7, the game’s final set of Levels, still looked like it did during the prototype phase. My initial artwork on those Levels came across as dated and I really disliked the look. Even worse, the toolkit I established for that World last year didn’t seem like it was going to provide a good foundation. It used way too many polys and didn’t account for the specific nature of many of this World’s puzzles. The outlook was bleak.

As of June 5th, 5 out of the game’s 10 cutscenes have been fully animated. That includes body animations, facial animations, effects, cues, intros, and outros. The SFX for those cutscenes was created independently by our audio dream team (Alba S. Torremocha and Noah Kellman), which means I was able to focus my attention elsewhere during the past four weeks. I greatly improved the World 7 toolkit and reduced the poly count while increasing the quality. That World has a really distinct look to it, one that I think is appropriate for the end of our journey together. I polished 2 of the 5 Levels in World 7, meaning I won’t return to them and I believe they are final game quality. (It also means they are ready for the last coat of audio paint before Jack’s final stamp-of-approval.) Speaking of which, we solved our “toss-up” problem by creating an online doc where I can label a Level “Gold” or “Needs Polish.” If a Level is Gold, it has my stamp of approval. Obviously, I want to get through as many of those as possible because I’ve already done a ton of work on those Levels and I don’t want to neglect the work that remains undone. This month, I “gold-stamped” Worlds 0, 1, and 2.

What’s next: To finish this game, I’ll need to animate five more cutscenes, polish three more Levels, create footprint effects for four more Worlds, and test every Level in the game on multiple iOS devices. That’s a lot of work! I’m going chonologically, so the cutscenes, footprints, and Levels remaining are all in the later half of the game. That will be my goal this month.

You’re all caught up. Now, if you want a sneak peek at some of the artwork I did this month, read on… but beware of game spoilers!

SPOILER WARNING: The rest of this article contains screenshots, GIFs and videos of later sections of the game. If you want to experience them in all their majesty for the first time on your mobile device when the game launches, don’t read on!

Obe Leaves Tiny Footprints Behind Him!

Let’s start with something fun that isn’t even much of a spoiler – Obe leaves tiny footprints behind him when he walks! On certain Worlds, when the terrain calls for it, we generate a tiny mesh and a particle burst where Obe’s foot lands. This mesh disappears over time, giving the illusion that Obe is squashing through mud or snow. If there are other characters in the scene, they leave footprints too. We don’t do it all the time though, because any effect can be taken too far. Footprints appear for the first time chronologically in Level 2-1, “Docks”, which you can see in the GIF above.

I know what you’re probably thinking: “you guys have an entire game to finish and you’re focusing on this insignificant detail!?” However, that is entirely the point of the polish phase! Now is the time to work on tiny details that will charm players and get them Tweeting & Instagramming about our game.

You see, humans are funny creatures. We tend to take a lot for granted, and make a big deal out of the smallest things. There’s so much we expect from games as a baseline that I think our enjoyment purely comes from moments where game developers go “above and beyond.” This is anecdotal, but my Twitter feed is always filled with game developers and fans who find tiny insignificant things in video games and then breathlessly announce “THIS IS WHY <game> IS THE BEST GAME EVER CREATED IN <current year>!!” My personal belief is that players gain a sense of pride and attachment when they find something in a game that they believe no one else has noticed yet. Hence, if you add in a lot of small details, you’ll create a lot of little moments in your game that create a bond between the player and your product. 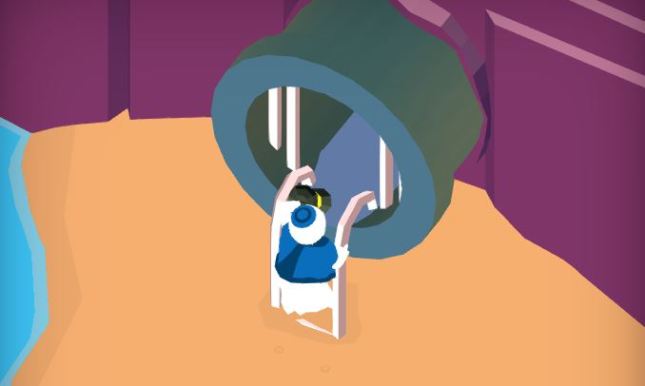 I cannot share all of the full video files of the game’s cutscenes with you yet, since five of them have been animated but none of them have sound. Even if they were done, I don’t think I’d want the solo cutscene videos out on the Internet like that. However, there are some things I can show you just to prove that I haven’t been goofing off all month long.

Let’s begin with a treat! Here is the game’s second cutscene, which happens just three Levels into Where Shadows Slumber. If you played a beta build at an event recently, you probably remember it as the annoying cutscene you couldn’t skip. (I’m working on that!) Obe has been thrown into a jail cell and his lantern has been taken from him. Alba and Noah sent it back to us with a first-draft of the audio dub, and it’s great:

I’m so excited to see what the other cutscenes are like with audio! Tomorrow I’ll be doing a recording session with them to get some voices into the audio mix as well. We’ll never record a word of English dialogue, but our characters can still make funny faux-speech noises and grunts. Since the rest of the cutscenes have no audio, here’s some short GIFs of the animations in action to tide you over:

Obe “meets” the Wardens in a bad neighborhood of the Forest…

He’s trapped! It was a door the whole time!

Obe is waylaid as Christopher Cross’ “Sailing” plays in the background…

Waking up on a random beach? We’ve all been there.

That’s enough sneak peeks for you! I can’t show you the full cutscenes just yet, can I? There has to be something left for you once you buy the game…

Next, let’s discuss the World polish I did this month!

Long-time readers of this blog will recall that over a year ago I expressed an interest in modeling an entire game World after the architecture of Bermuda. I won’t go into the details, since I wrote a whole blog post about it, but you should read that and come back here!

As I mentioned above in the progress report, I wasn’t crazy about how this toolkit looked when I first created it. But now I think it looks fantastic! Check out the before-and-after comparison of Level 7-1, “Ladder”, below. The first image (with the pink background) is how the Level looked up until last week. The sky was loud yet flat, the buttons looked repetitive, the house had no style, and the grass was way too dark. I didn’t even complete the ridges on the ends of this floating island! Speaking of which, why are these islands even floating?! 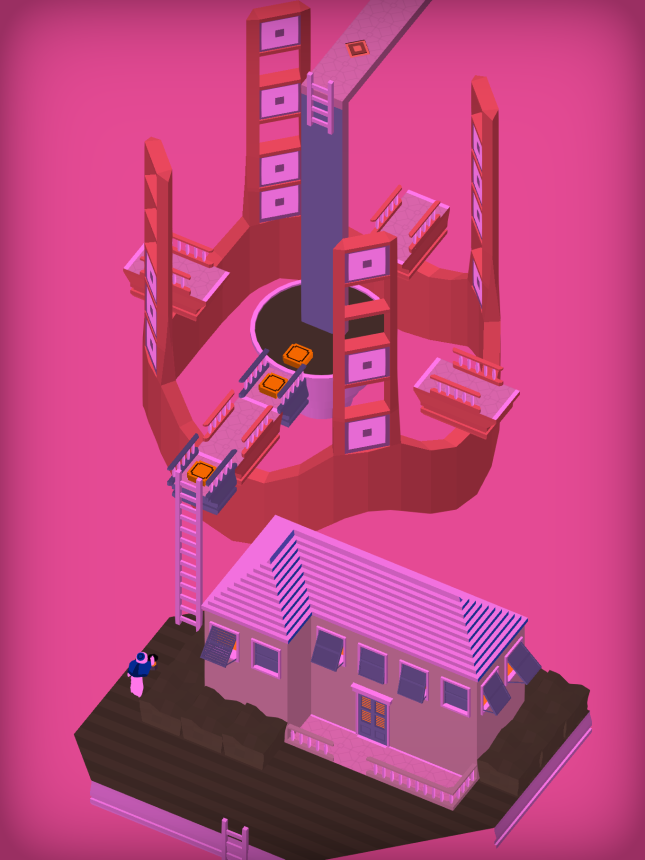 The picture below is a polished version created using modular pieces, hyper-specific artwork, and some new cool effects specific to this Level. The gradient background and fun pastel colors pay a nice homage to our muse, Monument Valley, while the window lights seem to pop off the screen. We get a real sense that Obe has come to this place in the dead of night, as he ascends ever higher. 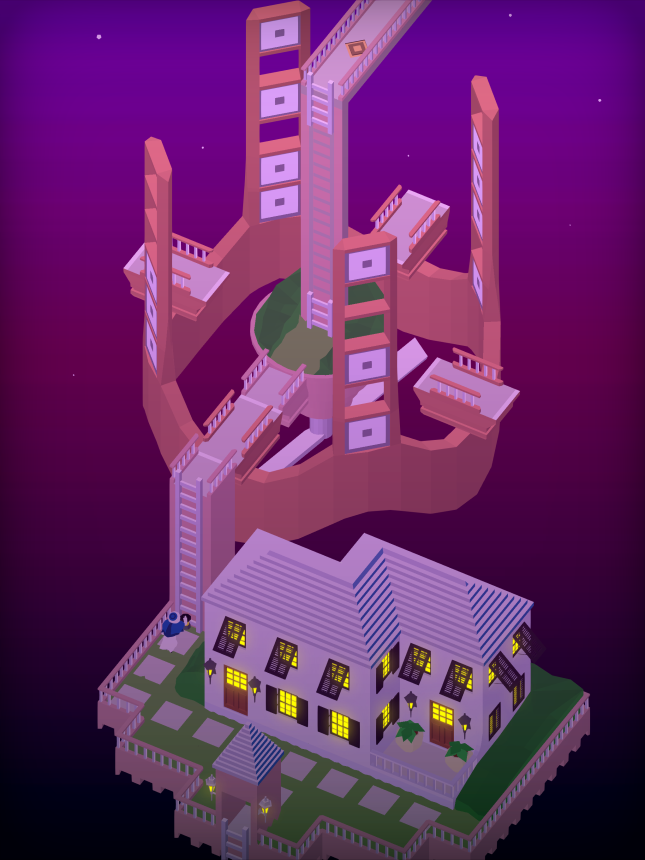 I’m not as sold on the next image, which is from Level 7-2, “Pond.” It’s always tough to tell when I’m being properly restrained, and when I’m just being lazy. Does this Level have enough going on? It seems like there is a lot of dead space. And yet, due to the constraints of the puzzle, this is not a Level I can go totally crazy with. I actually tried that once and I completely broke the Level and Jack had to put it back together. Whoops!

I hope this looks like a peaceful pond, and not a run-down YMCA swimming pool. This is a really cool Level, so I want to do it justice. Please leave a comment below if you want to help me improve the artwork for this Level! I really do check your feedback and I find it helpful to have outside input. After looking at these Levels for so long, I begin to lose perspective. Help me out!

This month, I want to put World 7 to bed. I also want to clear the way for Jack to be able to put his golden stamp of approval on every Level. (As an added bonus, I usually find bugs whenever I’m gold-stamping Levels. The more I find now, the less stressful our final testing period will be!) If I can manage that, I’ll officially be done working on the game’s puzzles.

As for the game’s story, I won’t be able to finish every cutscene in just four weeks. I need some time for World 7 polish, and cutscenes tend to take one week each. Progress on those will be slow, because animation is tedious. The good news is, it’s very easy to put in fake cutscenes when we need to do builds. (It’s just a Unity file that says “go to the next Level in 5 seconds, this cutscene isn’t done yet!) That means we can do a lot of testing even as I work on the remaining animations.

But silver linings aside, there is still a mountain of work left to do on this game. The game is nearly complete, but my trek through animation hell is just beginning…