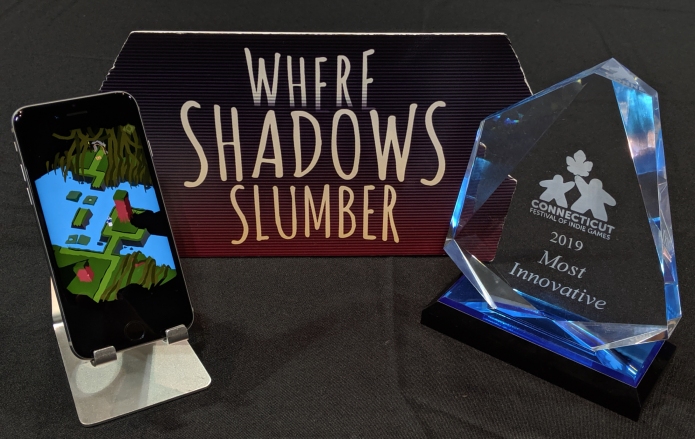 I’m thrilled to announce that I’ve returned from my triumphant conquest of Hartford, Connecticut:

2.) With a glistening, majestic trophy!

Feast your eyes upon it and cower in fear, plebians!

In all seriousness, the entire Where Shadows Slumber team would like to extend warm thanks toward the CT FIG team for this wonderful prize. Thank you for selecting us to show off at CT FIG, and thanks to the judges for recognizing our work!

Where Shadows Slumber, available now on iOS and Android, is certainly innovative. It may be similar to other games in style and tone, but it’s impossible to find another game that uses shadows the way we do. (We dare you to try! Helsing’s Fire doesn’t count.) If you know of another game that uses our mechanics and was published to the market prior to our 2016 demo, let me know in the comments!

Below you’ll find my scattered thoughts on the show, and some photos of the event. Thanks for reading! [^_^ ]

This show was less busy than last month’s TooManyGames. I suspect it’s because the Hartford Convention Center was divided into two Halls, A and B: A was for Connecticon, and B was for CT FIG. The divide is a bit strange, and I kept wishing more people would come over from that side during the weekend. But I understand CT FIG is still growing – the last time I went to this show, it was held in a board game shop in Newington!

I conducted 100 demos with people during the weekend, which led to 11 confirmed downloads, mainly on Android. I also think I’m going to switch from giving cards away free to giving pins away for free. People REALLY love those cards (obviously, because they have screenshots from the game on them!).

The setup, above. This is the first time I’ve shown off Where Shadows Slumber using a round table. (CT FIG began as a tabletop show and I was only 1 of 8 digital titles at the show!) I actually really liked that. It made way more sense than having an awkward rectangle table. Keep note, showrunners!

Everyone loved the game! That one guy on the right was at the table for nearly four hours on Saturday [o_o ] He beat EVERY puzzle! (And found a few issues… they’ll be fixed once the big July patch launches later this month.)

An intimate award ceremony, held after the show ended on Sunday.

Last but not least, shout-out to my boothmate Promote Pluto who has an adorable card game / webcomic about restoring Pluto to it’s former glory as a planet. So cute!

We can’t wait to see how CT FIG grows over the next year! 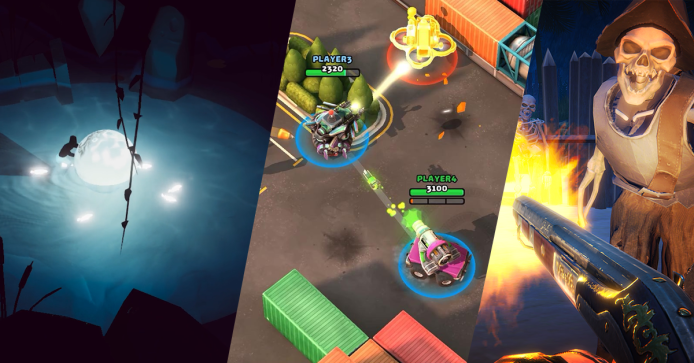 Last week I had the pleasure of visiting London for the Indie Prize contest at Casual Connect Europe! (If you want my thoughts on the show itself, you can check out the previous blog post on this feed here.) This post is exclusively a roundup of some of my favorite games from the show, regardless of who won the actual Indie Prize contest.

Don’t feel bad if you’re not on this list, I only got the chance to play a few games out of all the ones there! Plus there are still some on my list for later, like Holly’s Home Design. You didn’t think I’d forget about you Holly, did you?

Morkredd instantly caught my eye because the aesthetic looks like our game Where Shadows Slumber, and I just had to know what the mechanics are. Whenever I see another game that uses shadows, my gut reaction is “Did they copy us? Did we copy them? What is this game?!”

Well it turns out no one copied anyone! Morkredd is a co-op game for Nintendo Switch where you play as little shadow dudes. If your character ever falls into the inky-black shadows, he dies and the group loses. This forces a restart. It’s tricky, because you don’t normally pay attention to the shadows being cast by yourself and other objects. (I finally understand the initial frustration everyone has when they first play our game!)

I don’t think Morkredd (which is Norwegian for “afraid of the dark”) is available for the Nintendo Switch yet, but you can follow their progress here.

Although I didn’t get to play Oscar’s game too much, I appreciate how:

Yes, that’s an iPhone you see in the image below. I have no idea what the controller rig is called, but it’s really cool. (No, you don’t need it to play – but you probably need it to be good.) Gameplay video below:

Oscar has had a lot of success in the indie space already, so it was good talking with him. I wish him luck on Unbroken Soul!

Andrey has a really sleek looking motorcycle game that’s the third in the series. The first two were pretty different, so I’m assuming this is the kind of gameplay he’s always wanted for Hellrider and he finally made the game he was dreaming about. It’s amazing what people can make for mobile devices these days! Check it out:

I really love the art style for this game. Everything fits together so well in a cartoony, low-poly indie way. This game is not available to the public yet, but he has all of his current releases available on his website here.

Not only is Pico Tanks an impressive online mobile game with cute art and fun gameplay, their setup at the Indie Prize was incredible! Look at the effort they put into this display. Indie Prize gave us the smallest amount of space I’ve ever had at a show – essentially just 1/2 of a table and 1 chair. Using that limitation, Panda Arcade created a themed display that blocks out other competing games from taking up your attention, and invites you into the space. I’m impressed… now I just need to ask them how they did it!

Finally, this pirate game was a little odd and I’m not really sure what was going on, but his setup was pretty good. A pirate pistol, a box of gold coins, and plenty of signs – honorable mention for you, pirate game! Last Pirate is a survival game where you’re stuck on a deserted island, forced to survive using only your rusty hook-hand and your wits. (The developer showed me the game and chopped down a tree with his hook, then got killed by a wild boar. 10/10 would be a pirate again)

The pirate’s life for me! Check it out on the Google Play store, it has a ton of downloads so far.