When I was showing off Where Shadows Slumber earlier this year at MAGFest 2018, one of my fellow game developers gave me a stellar compliment. As he watched the game’s second cutscene, he said “these animations are so evocative.” What he meant was that the animation was conveying a large amount of emotional detail even though the characters never speak a word. This is especially impressive considering the cutscenes don’t even have sound effects yet!

Sometimes, we only remember the one negative comment we get in a sea of compliments. But for once, a positive remark stuck with me. Evocative. If there’s one thing I can do as the animator for this game, it is to ensure that the player feels a range of emotions when they watch the game’s story unfold. But how can this be accomplished when our character is so small on the screen? More practically, how is this actually achieved using a 3D modeling studio and the Unity 3D engine?

This blog post is a quick glimpse at how I set up the facial animation rigs for the characters in Where Shadows Slumber.

First: The Old and Stupid Way

Before I show you how I animate the faces in the current build of the game, I should show you the first way I tried it back when we were creating a Demo of the game. The old Obe model, shown above, had a perfect sphere for a head. In the image above, it’s grey. Then, I put in two snowman eyeballs as flat discs (they look teal in the image above) and a mouth plane that wrapped around his ball-head (obscured above). So far, so bad – nothing can be animated here! These objects are static. His face won’t look evocative at all.

My answer was to create little patches of skin that could be moved around to simulate facial animation. Though they look peach in this image above, they would blend in 100% with his skin tone thanks to Jack’s shader. My philosophy was simple – if the skin slabs were out of the way, his eyes were open. If they blocked his eyes partially, that was a facial expression. In the image above, near the bottom-right, you can see that Obe’s unsuspecting opponent has his skin slabs set to angry because they partially block his eyes in a slanted direction. By moving the slabs around in time with the animation, facial expressions were simulated.

By spending more time modeling Obe’s head, I was able to create a flexible skull with some textures mapped onto it (black for features, white for skin) and preset animations with Morpher. This skull can be tuned to different emotions, and even combinations of emotions. Above, you can see how Obe can express a range of poses: angry, devastated, confused, joyous, blissful. Now that you’ve seen the final product above, here’s how to set up your own:

Step 1: Model the base head

Spend some time crafting a base head for your character. Note that you’ll be unable to edit it once you begin Morphing, so take your time. Create flexible eyes, a mouth, a nose and ears (if your character has those) and be sure to add enough loops so they can move around later without looking jagged. This time, I gave Obe detached cartoon eyebrows so I could be more ambitious with his facial expressions.

Step 2: Duplicate the head as a Copy (not an Instance) and pose it

Now you must copy the base head and move it somewhere else in the scene. (I like to make a Game of Thrones style wall of faces.) Edit the vertices on this model into an extreme pose, such as furious anger or deep sadness. This pose will be what “100%” of this emotion looks like. Note that the vertices from the base head are going to move (morph, if you prefer) into the new positions you give them here, as well as every point in-between. Pay close attention to the topology of your model when you choose new positions for these verts, and your animations will look smooth. Above, you can see I do mouth poses and eye poses separately, so a wide open mouth (agape) can exist separately or simultaneously with wide open eyes and raised eyebrows (shock).

Step 3: Connect your pose to the base head in the Morpher modifier

The base head will have the Morpher modifier on it. None of the others need it. From the base head, you can use Pick Object From Scene to slot in certain poses as animation sliders. Then, using the arrows shown next to the poses, you can “morph” these targets from 0 to 100. 0 is going to look like your base head – 100 is going to look like 100% of the pose. If you combine two poses, as I did above, you may get weird results. But in this case, shocked eyes and a mouth agape work well together.

Step 4: Repeat Steps 2 and 3 for every face pose you’ll need for this character

I made separate poses for Obe’s mouth (left of center) and his eyes (right of center). The yellow shape in the center is his base head. I tried to do every emotion I’d need, as well as building blocks like “shut R” for the right eye being closed. One thing I didn’t need to do is detailed mouth animation for talking, since he never says anything in a real human language. He just wails in terror a lot. But if you were doing this for a regular animated film, you’d want a whole set of mouth animations for the various sounds we make with our mouths (Chuh! Puh! Quah! Teh!) I’m happy I didn’t need that, because I hate doing those. 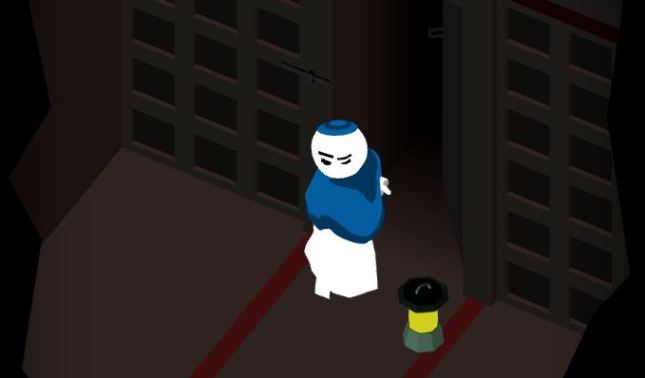 Step 5: Animate in a Scene when it’s all ready

This massive setup time bears fruit once you begin animating. Having a flexible facial animation system is remarkable. I love this system so much, and I never have to worry about whether Obe is expressing the emotion I want. Everything is correct and his face is super easy to read, even at a distance. Here, he’s giving an “…OK” kind of look as he escapes prison early in the game’s story. Though this look is not programmed in directly, it’s a combination of four Morph Targets: left eye closed, right eye closed, mouth closed, and “serious.” That’s the beauty of working with Morpher!

If you’re building your own facial animation system, be warned that it’s a lot of work. However, it will pay off in the end. Good luck making your animations evocative! Feel free to ask me any questions in the comments, over email, or on Twitter. I’m always eager to help. Happy blending, everyone!

We hope you enjoyed this technical look at the systems behind the game’s artwork. You can find out more about our game at WhereShadowsSlumber.com, ask us on Twitter (@GameRevenant), Facebook, itch.io, or Twitch, and feel free to email us directly at contact@GameRevenant.com.

2 thoughts on “Inside Animation: Face Morphing”

Leave a Reply to Read This method Cancel reply